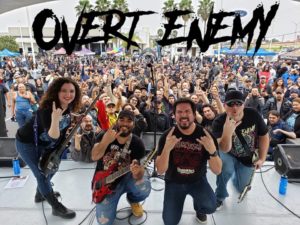 Formed as a Slayer tribute band in 2013 by drummer Jaime Ayala and frontman Leo Ortiz, Overt Enemy has since evolved into one of the fastest growing metal acts in Texas. With a uniquely versatile set that blends razor sharp originals and unerring Slayer covers, Overt Enemy have honed a sound that is wholly their own. The bands relentless work ethic as well as the addition of guitarist Robert Hahn and bassist Slayerella, the wife of frontman Leo Ortiz, has seen them rapidly grow. Once a one-off tribute band, they now destroy clubs throughout the South Texas region. By collaborating with Confused Records on their 2018 debut, Inception, the group has built a worldwide fan base and embraced all manner of opportunities including supporting national acts like The Accused, Sons of Texas & Shattered Sun. Simultaneously, Overt Enemy have built strong relationships with their local rock station, KFRQ 94.5FM as well as international stations like Castledown FM in the UK and received favorable press from magazines/websites including Banger TV, Metal Hammer Magazine, Power Play Magazine, Metal Injection & the band was recently featured on Sirius XM’s “Liquid Metal”. Suffice it to say, the groups infectious grooves have started to conquer the world.
Now, the band looks to the future with their new album, Possession. Having once more entered the studio with producer/engineer Joshua Lopez (Immortal Guardian) the band is sounding more vicious than ever. With growing underground buzz & tour dates being locked in around Texas it seems like there is no stopping the band who seek to conquer the Lone Star State. In 2019 Overt Enemy have honed their thrash sound into something unique, modern and utterly contagious. The Texas metal scene has always been thirsty for blood, and Overt Enemy plan to give it to them!

“‘Possession’ is an EP delivered with all the honesty, passion and integrity of a true thrash gem. (Score: 8/10)”

“Fun, intense, and extravagant. Instead of imitating, Overt Enemy stands on the shoulders of thrash metal’s Big Four.”

You have Successfully Subscribed!

Share This
We use cookies to ensure that we give you the best experience on our website. If you continue to use this site we will assume that you are happy with it.Ok